To the Celts, Avalon is the mysterious place for the land of the dead and literally means the “land of apples”. Thus this is a holiday for celebrating the bounty of the harvest and the desire for the living to be reunited with their deceased loved ones. But the holiday is also named for the Welsh God Mabon.

Mabon translates to the “great son”, but some say it’s the “great sun” and relates to the waning reign of the Sun in the sky as summer fades and the season changes to beacon the darkness of fall and winter.

From mythology, Mabon the person was the son of Modred who was kidnapped at the age of 3 and later rescued by King Arthur. His life represents the innocence of youth, the strength of survival and the growing wisdom of the elderly. END_OF_DOCUMENT_TOKEN_TO_BE_REPLACED 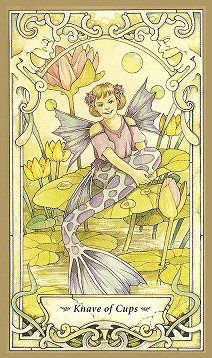 You can sit pretty today. Relax and enjoy the explosion of your garden as it springs up in abundance. Good news from across the water will come with blessings of success and achievement. So sit back and smile. You’ve worked for it. But don’t forget the little things on your plate today that still need to be done.

Remember last year in the fall when you worked so hard to prepare you garden for spring planting? Remember all the work you did earlier this spring to plant your new seeds and nurture your dreams, ambitions and new plans for the year? Take a moment today to look at how far you’ve come. Look over ALL the little successes you’ve had and all the hard work you’ve done to set the foundation for everything in your life to move forward for the better. You’ve come a long way baby – and if you take a little time to notice, things are not only changing, they’re changing for the better! Enjoy it and for today you can sit with pride and confidence in the work you’ve done and blossoms that are opening in your world!

Every culture has some folklore about nature spirits, sprites, faeries and a like. The Norse were big on these nature helpers. Celtic mythology is filled with story and legend of sprites, faeries and the infamous leprechauns. You can find them in practically all Native American cultures from the far north to the far south. So it’s not hard to find others who not only believe in these spirits, but who have encountered them as well.

You can find signs of faeries and sprites all the time if you look for them. Sprites are known to leave circular decorations through a forest. If you see vines that seem to be molded in a wheel for instance, sprites have been there. Look in your own yard for faery rings, these are mushroom circles that have been left by dancing faeries.

Today the sprites I hear people ask about the most are Garden sprites or faeries. How to attract them and get them to help care for the garden to promote growth and keep harmful bugs away. END_OF_DOCUMENT_TOKEN_TO_BE_REPLACED