I always loved the look of my hanko. The characters seems to create the image of a wolf. The head on top and two legs on the bottom. Fitting for me I think.

The Hanko of Spring Wolf

At the bottom of our posts you may notice a seal with Japanese characters. Some folks have asked what that is. Well it’s called a personal Hanko and it’s my copyright seal for the articles here on Springwolf Reflections. But it’s so much more.

In Japan, seals in general are referred to as inkan or hanko. The first evidence of writing in Japan is a hanko dating from 57 AD, made of solid gold and given to the ruler of Nakoku by Emperor Guangwu of Han. At first, only the Emperor and his most trusted vassals held a hanko seal, as they were a symbol of the Emperor’s authority.

Modernization of these seals began in 1870, and the hanko finally came into general use throughout Japanese society.

A jitsuin, is an officially registered seal. The size, shape, material, decoration, and lettering style of jitsuin are closely regulated by law.  Traditionally, inkan and hanko are engraved on the end of a finger-length stick of stone, wood, bone, or ivory, with a diameter between 25 and 75 millimeters (1 and 3 in). 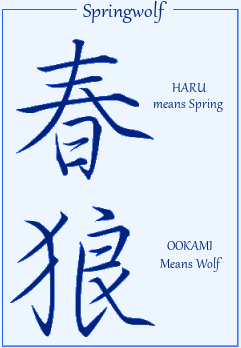 Today the most common ink used is red and hanko sets are kept in decorative boxes to honor their history and the importance of their purpose. These boxes are kept under high security; except at official ceremonies, at which they are displayed on extremely ornate stands or in their boxes. 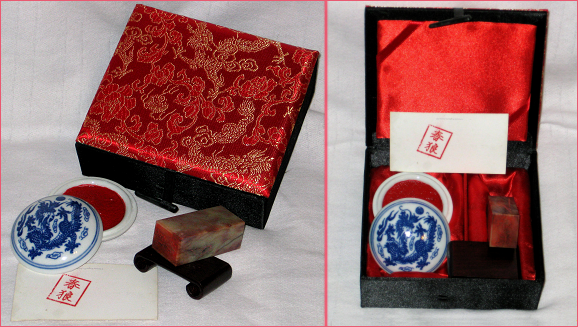 These seals are still used in Japan for professional and personal purposes, Government offices and corporations usually have inkan seals specific to their bureau or company. Most requiring registration with local government offices much like a trademark is registered in the U.S. today. Like a signature to a Westerner, they are indispensable tools for Japanese adults in authorizing a myriad of transactions, from automobile registration, to bank activities to setting up house utilities. Nearly any occasion that would call for a Westerner’s signature would call for an impression of a hanko in Japan.

We first became exposed to the hanko when I was seeking certification in a spiritual healing method known as Reiki. Without getting to deep into what Reiki is, it is taught by trained and certified Masters. Since this is a healing art that holds its history in Japan, the hanko not only identifies the traditional method, but also the masters who are certified in its historical and traditional lineage.

Using the hanko in this way makes it harder for charlatans to claim lineage that they have not acquired legitimately. There is some amount of prestige to being taught and certified by a traditional Master. So it’s a lineage that is often desired by modern holistic healers.

One of these traditional Masters, Rev. Beth Gray used her personal hanko on graduation certifications (Beth Gray Certificates). This practice inspired many of her graduates to follow in those footsteps not only to honor her teaching, but also the lineage of traditional Reiki.

Today’s practicing Reiki Masters choose to use the Kanji version of “Rei Ki” as their Hanko (as seen on the right). Others use words to represent their personality, a special phrase, or their personal name (such as the Kanji of SpringWolf displayed above).

The use of a hanko in Reiki can create a connection between the Reiki practitioner and the Reiki origins in Japan. It can be used as a sigil during Reiki sessions to connect to healing energy. It can also be used as a symbolic seal during attunements. They can be a source of self promotion, pride or personality. They can be seen in email signatures, decorations on web pages and any other objects that suits your fancy.

I use my personal hanko to identify my writing, to create an authorized seal on certificates, to place copyrights on my intellectual property, as a symbol during attunements within Reiki and to honor the historical connections to the past. My personal seal is a very spiritual thing to me. I see it as a magikal sigil, a symbol that identifies me in the realm of spiritual energy. I use it to mark tools I may use in my magikal practices, for making a connection to magikal tools, I’ve even stamped it on items that have meaning to me or that I want to protect with special energy. Such as my purse, the back of my tablet, it’s even inside on the interior of my car.

If you are interested in your own hanko, I suggest the following websites: