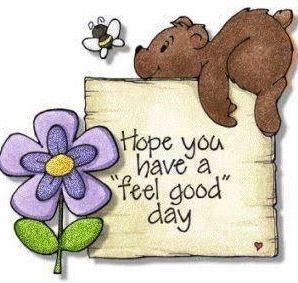 I think we all need a pick me up.

Ignore the haters.
Walk away from the fakers.
Close the door on the takers.
Change the channel on the instigators.

Choose to have a nice day!
It will piss them all off.

Many years ago when I was a student of my favorite teacher, a Shaman named Roger, I was having an unusually bad day.

He asked me why I was allowing the hate and jealousy of others control my emotions and my day? To be honest I didn’t know what to reply to that question. They made me mad, they hurt my feelings. He said “No they didn’t. You decided all on your own to listen to their words and you made the choice how you were going to feel. They didn’t make you feel that way, you allowed them to dial in a particular emotion and hit the ‘go’ button”.

Ok, I get that. But at the time did it really make a difference? No. But over time it has. Over time, with age and practice, I’ve learned that the best response and better revenge is to ignore the haters as if they never existed in this world. They really don’t like being ignored. Their whole purpose in lashing out at others is to gain attention, even if it’s bad attention. They crave the limelight. When you ignore them, you take away their power over you and others too.

By holding onto your own free will and choice, you strip them of any satisfaction and deflate their hate-filled ego. If you’ve followed my blog for any time, you may know that I create a motto for the year to get me through the rough times. I call them my Annual Mottoes. Over the years they’ve evolved thankfully.

In 2002 I was having a difficult time with a boss who was, well quite simply an ass. The kind of guy who would push someone to tears while trying to manipulate them and hound them into agreeing with him. Didn’t matter what the topic was, he wasn’t going to leave you alone until you said “yes you’re right, I’m sorry”. He was a “Dick”tator of the utmost proportion.

In 2003 I created a motto to deal with him: I don’t mind, because you don’t matter. It took about 3 months of saying that in my head on nearly a daily basis for the energy of that thought to really sink into my consciousness. But when it did, I learned to stand up and walk away from his continual bombardment. Instead of getting up angry, I would get up and say “Ok, whatever. I don’t mind because you don’t matter.” and go on about my day. Even if that meant simply walking to the ladies room or the pantry to get a cup of coffee. It took the wind out of his sails and gave me the power back. Not allowing him to ruin my day really seemed to piss him off. And the more I did this to deal with his attitude, the more angry he got, until he was called to HR on day for pissing off the wrong person. I had nothing to do with it. But it was nice to see that karma come full circle.

Today in our world there’s a lot of hate being thrown around. And those people doing the throwing are trying real hard to be noticed and to be relevant. But they’re not. Hate and ignorance are on the way out and these people are fighting, scratching and screaming to stay in power. They’re not going to. Mother Earth is pulling us into a shift of Cosmic Cycles and we’re going to go willingly or we’re going to be left by the wayside.

Be the person who rises above the hate and ignorance. Be the soul that refuses to give into the hate and ignorant rhetoric. Take a moment to remember “You don’t mind, because they don’t matter.” Live the life of love in a “feel good day” of YOUR own making!

Love and Blessings to one and all;