Rainbows are one of the most beautiful spectacles nature has to offer — so beautiful, in fact, that they’ve inspired countless fairy tales, songs and legends. It’s a good bet that most of the artists behind these tales were totally mystified by the rainbow phenomenon. But of course there’s a scientific reason for how they’re formed.  It has to do with light refraction, bending light, and even frequency.

When white sunlight hits a collection of raindrops at a fairly low angle, you can see the component colors red, orange, yellow, green, blue, indigo and violet — a rainbow. ~ Making a Rainbow at Science.HowStuffWorks.com

Single Rainbows
Rainbows appear all over the world. So of course there are a ton of myths and legends about what they mean from place to place. Some meanings also represent the actual science behind their creation too.

Most people know the story about the Irish leprechaun hiding their gold at the end of the rainbow.  According to fables, Leprechauns are tiny mystical forms of faeries who were originally linked to the Tuatha De Danann of Irish mythology. They normally take the form of an old man in a red or green coat, when they appear to humans.

But they are also known as mischievous faery creatures who like to make shoes and store their gold in a pot that they hide at the end of a rainbow.  Because rainbows don’t come around everyday, so it’s a good place to hide their gold. Yet it’s a place that will appear from time to time that allows the little fae to grab a handful of gold when they need it. And if you find that pot of gold and can get it from the leprechauns, you maybe allowed to keep what you can grab.

The Norse saw the rainbow as Bifrost (sometimes Bilröst or Bivrost) the burning rainbow bridge that reaches between Midgard (the world) and Asgard, the realm of the gods. You may have seen this in the movie Thor. In The Dark World movie, Thor refers to the Bifrost as being destroyed for one of his reasons for not coming back to Jane here on Earth.

According to the Prose Edda, the bridge ends in Asgard at Himinbjörg, the residence of the god Heimdallr (Heimdall in the movie, is the guardian of the gate). He guards the gate and bridge from the jötnar, a mythological race banished from entering the world of Asgard. (Yes I’ve seen the movies too many times!)

Most indo-european pagan cultures have some variation of this tale from the Norse. The Rainbow is a bridge between ages of enlightenment, or between the planes of spiritual realms. Some myths see the rainbow as a bridge of growth for an individual and their mission toward enlightenment.

In some of these legends, a complete rainbow, seen in its full circle is an omen of the circle of life. In this legend, someone is about to be born, or someone is about to die. In variations, the cycle might concern a phase in one’s life, a mission, journey, war, battle and so on.  The cycle of an event that’s about to begin or coming near its end.

In the ancient beliefs of Japan, rainbows were the bridges that human ancestors took to descend to the planet. This legend is shared, to some extent, with Chinese mythology, which says the red represents the feet, and violet symbolizes the head of a human being. Therefore, a single rainbow signifies a human descending from “heaven” to earth. This could be for communication, or rebirth.

Also in Chinese mythology Hong or jiang, is a two-headed dragon, known as the rainbow dragon. Both heads are seen as bad omens. “The girdle is the rainbow. Its appearance announces that someone who ought not to is about to have a baby; for the arc of the rainbow typifies the swelling girdle of a pregnant woman. No one dares point at it, because pointing is disrespectful, and one must respect a warning sent by the Gods.”

Rainbows play a variety of roles in Native American mythology, ranging from the spiritual to the whimsical. In the Navajo tradition, the rainbow is the path of the Yei (holy spirits), and is frequently depicted in sacred sand-paintings. In Cherokee folklore, the rainbow is said to be the border of the sun’s coat. The Rainbow is also used as a clan crest in some Northwest Coastal tribes, such as the Haida. ~ Native American Rainbow Mythology, there’s some great links to Native stories here.

To the Māori people of New Zealand, Hina the lady of the moon, caused a rainbow to appear to create a bridge between the celestial realm and earth, for her mortal husband to return to earth to end his days, since death may not enter her celestial home.

The rainbow is linked in mythology as a bridge to the other worlds (such as Asgard and other Divine places), an archer’s bow, a dragon, a serpent, and many more mystical things.

Even when man discovered, or realized, the science behind how rainbows are actually created, a number of people felt the science confirmed their beliefs of what a rainbow means. At the beginning of this article I mentioned light refraction, bending light, and frequency as the scientific reasoning of rainbows. Each of these components were seen as aspects of a rainbow’s purpose. Refraction was really the Divine realm reflecting itself back to the Earth, creating a bridge to remind man where he came from and where he will return. Bending light, showed man how he can communicate with the Divine realm. By bending an ear and listening to the Gods speak through the rainbow’s light. And the frequency, what in spiritual terms we’d call the sounds or vibrations of the rainbow, are the voices of the Divine talking to man.

In Hindu mythology, Indra the god of thunder and war, uses the rainbow as a bow to shoot arrows of lightning at his enemies. The Sumerian farmer god Ninurta defends Sumer with a rainbow bow and arrow, and wore a crown described as a rainbow to match the bow.

Like the first people of the United States, the first people of Australia also lived in different tribal nations. One Aboriginal myth, explains the rainbow as a snake, the Creator in Dreaming, which is the infinite period of time that “began with the world’s creation and that has no end. People, animals, and Eternal Beings like the Rainbow Serpent are all part of the Dreaming, and everyday life is affected by the Dreaming’s immortals,” – Wikipedia

For Buddhists, the rainbow is “the highest state achievable before attaining Nirvana, where individual desire and consciousness are extinguished.” 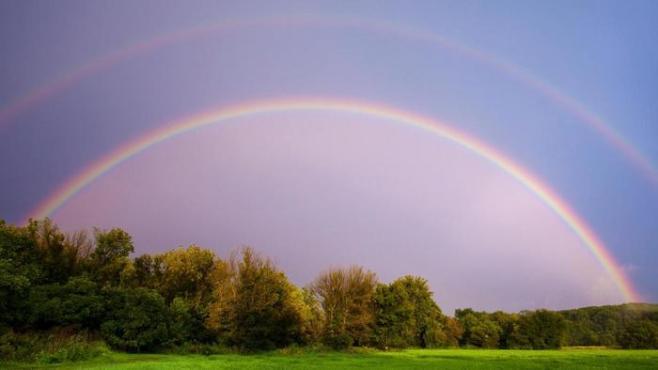 In Chinese mythology, a double rainbow, represents the movement from earth to heaven due to its reversal of colors from the single rainbow. It is also considered to be a sign of future success.

This concept of coming and going between the realm of the gods and the world is shared in many ancient shamanistic cultures as well. Such as the early Celts, the Norse and other Germanic peoples.

Modern Pagan Metaphysics
Today Pagan Metaphysics may follow one of these old cultural mythological views. For instance, Pagan traditions that follow a Celtic Shamanistic path would see the rainbow as a bridge between realms of knowledge and spiritual existence. The bridge could be used as a gateway to attaining some specific knowledge and bringing back to Earth for the benefit of the Clan.

More modern traditions of Paganism and New Age paths view the colors of the rainbow as representations of the chakras in a 7 color chakra system. In this perspective the first chakra begins at the Root (red) and moves up to the Pituitary chakra (violet). The 7 centers are typically associated with Hindu teachings or variations of those practices. The 9 center systems are typically associated with Tibetan systems. My tradition follows the 9 Chakra System.

In more modern Wiccan traditions, the rainbow symbolizes hope, connection and unity of spirit between all things. It represents the links between Spirit and Body, The Celestial Universe and Earth.

Pagan traditions that lean heavily on Metaphysical principles see the rainbow as a bridge between peoples or worlds, similar to the Norse. In this variation the worlds aren’t necessarily physical words, but rather spiritual paths. Connecting all beliefs together by a bridge of light, inspiration, commonality and compassion. This might have been one of the inspirations for the rainbow colors to become the symbol of LGBT pride. At least I’d like to think that’s one of the reasons.

Rainbows can be seen in their full circular splendor too. The best way to see this is from a plane looking down on Earth. In front of a waterfall, and occasionally appearing around the sun. Some say this phenomenon is seen best from countries that exist around the equator. I’m not sure about that. But it seems to be a popular saying.

How ever you feel drawn to see the rainbow and what it means, share your vision and write it down. Allow yourself to change your perspective over time and evolve your description and definition. No one said you had to follow an ancient myth. Pick and choose the stories you like and build your own legend of the rainbow’s energy and purpose. After all it’s your experience. Why shouldn’t you follow the meaning of it’s appearance based on your personal experience.

3 thoughts on “The Symbology of Rainbows”