“Looking at the face of a friend, let me know I’m going to be Ok”

What Face To Face Communication Can Do

Today many are seeking spiritual comfort as they try to hold onto hope that things will improve in their lives. Or as they face challenges in war and military service. For some, hope is all they have to make it through one more day.

Sometimes a person simply wants someone to listen. Often a simple phone call can get them through to the next week. But for some a face to face moment of communication, where compassion can be seen, can go a long way to helping them make it through yet another day of despair. It’s amazing how much a kind word or simple smile can lift someone out of their fear and hopelessness.

How many times have you heard someone say “I found strength from her smile” or “Looking at the face of a friend, let me know I’m going to be ok”. Visual communication can say so much more than an email, tweet, or instant message. I can provide a greater sense of connection and understanding than a simple voice can.
Imagine how much different a story or explanation can be when you “see” it being told first hand versus only hearing it on the phone. Visual communication provides comfort to those who feel far away from everything and everyone they know. This can be especially true for soldiers and military support staff who are serving in other countries.
Military Challenges
In 2007, the Pentagon counted more than 1,500 self-identified Wiccans in the Air Force and 350 in the Marines, but no numbers were tracked for the Navy or Army, which are much larger branches. It is unclear exactly how many service men and women are pagan practitioners in the U.S. Armed Services. Many are afraid to let their religious affiliation be known due to the harassment and discrimination that is allowed to occur in the open and behind the scenes.
Pagans, also known as Neo-Pagans, Pagan Metaphysicians or sometimes Witches, practice various forms of nature-based spirituality. There are multiple forms of Paganism, including  Asatru, Celtic Shamanism, Druidism, Heathenism, Wicca, Spiritual Witchcraft and many others.  It is the fast-growing faith in the United States as reported by ReligiousTolerance.org. (Learn more about Paganism and Pagan Metaphysics).
From 2001 to 2008, the American Wiccan/Pagan population increased more than two-fold (from 134,000 to 342,000), and the 2008 American Religious Identification Survey estimated there were nearly 700,000 Pagans and Wiccans in the United States. 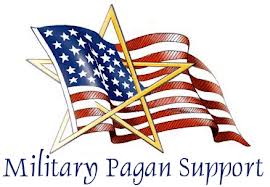 Let me preface the rest of this section by explaining that no one here is suggesting that the U.S. Military block anyone from practicing their chosen religion during service. That’s not what this is about. We want to shine a light on the issues Pagan Soldiers and their families face and how hard it is for them to reach out for spiritual help.

To my knowledge, there are NO pagan clergy men or women actively serving in the military. The last military officer that tried to provide Pagan spiritual service was Don Larsen, a Pentecostal Christian minister at Camp Anaconda. Larson, a serving Chaplin had seen the scars of war too many times. He began questioning his own faith and eventually transitioned his beliefs away from Christianity to paganism. He then tried to change his Chaplin status from Pentecostal to Wiccan. He was forced out of the Chaplaincy and the Army in 2007. If this can occur to a Pagan Minister, how can pagan soldiers find spiritual comfort when they need or want it?

Every soldier is required to attend an indoctrination of “spiritual training”. The military claims this training is designed to expose soldiers to a variety of religions that they may encounter in their service and emphasize that “all training is mandatory“. But many question the validity of this claim. The New York Times reported on this story and the proliferation of intolerance in 2009: Questions Raised Anew About Religion in Military

Sadly the stories of intolerance and bigotry against any soldier who is not a devout practicing Christian are rampant. But remember, these soldiers are no less patriotic than any other soldier. They serve their country freely and they didn’t ask you what religion you practice or don’t practice before they enlisted. They are fighting for the freedoms we all enjoy; but they themselves are not provided the same rights that others receive for their service.
In 2006 Sgt. Patrick D. Stewart, a pagan, was awarded the Bronze Star and paid the ultimate sacrifice for his country. But it took a court battle initiated by his family against the Military to allow him to be buried with honors in a military cemetery with a Pentacle engraved on his tombstone. Because of their fight, on April 23, 2007, to settle the lawsuit, the Department of Veterans Affairs agreed to add the Wiccan pentacle to the List of Approved Religious Symbols that it will engrave on veterans’ headstones. But did it really have to take a lawsuit to make this happen?
Robert Barner is an Air Force Mechanic. He and his wife, Stefani, are practicing pagans. A fact they don’t hide or keep secret. In The Plight of Pagans in the Military (June 20, 2012) from Religion and Politics the discrimination pagan soldiers face comes to light:
Robert’s co-workers have “jokingly” suggested the couple worships the devil. While serving two tours in Iraq, he was subjected to attempts at Christian evangelism from other troops. Once, a Commissary worker even asked the Barners if they sacrificed goats. But for Stefani, the most egregious comment came from a military chaplain. He told her and another Pagan military wife, if he had his way, “You people wouldn’t even exist here.”

These issues abound in all walks of life and not simply in the Military. Pagan practitioners face Religious Discrimination on a daily basis.

In “Spiritual Fitness Can ‘Lighten Load’ for Troops, Families” (Dec. 15, 2010) American Forces Press Service
The Army defines spiritual fitness as the development of the personal qualities needed to sustain a person in times of stress, hardship and tragedy. These qualities can come from religious, philosophical or human values, according to Army Regulation 600-63, and form the basis for character, disposition, decision making and integrity.
..
The Army’s top chaplain discussed the importance of spiritual fitness to servicemembers’ overall well-being and its potentially “life-changing” benefits..

Maj. Lisa Elliott, a Wiccan serving in Afghanistan, said being allowed to openly celebrate her beliefs makes her a better soldier and makes it easier to serve her tour in Afghanistan.
“You are challenged when you come over here just to deal with the situation and by somebody supporting your faith it makes it less challenging,” said Elliot. “It gave me the extra energy to go on with my job. I felt re-grounded. I felt at home.”

What if those spiritual values are not supported by the very military a pagan soldier is trying to serve in?

Sadly I hear about these kinds of frustrations all the time. Soldiers who are serving in harms way, who want to speak with someone who believes in the same things they do, but who feel ostracized or segregated from their own clergy. Like many others spiritual people they too want to “lighten the load” and find solace in talking to one of their “chaplains”.

They turn to the internet for help and communication, because they cannot find this support at their duty station. They want to see a smile or the compassion in someone’s face and hear the caring in someone’s voice in order to renew their strength and dedication to their mission. There are many more “Robert and Stefani” stories out there. And you can help them find someone to talk to.

Creating A Place For Hope

Helping those in need is fulfilling for sure. But knowing you helped someone get through one more day, feeling empowered or left with a sense of renewed purpose is truly a blessing. We want to reach out to those who have asked us for this type of communication, help and support. But we need your help!

These stories and those similar to the one we shared in “A Story of Hope“, inspired our recent campaign to Help Others and Keep Hope Alive. If these stories have touched you in some way, if you gain empowerment into your own life from the articles and daily messages here on Springwolf Reflections, consider helping those who may not be as fortunate as you right now.

It may not seem like much, but every bit counts and helps. Your contribution can be made securely through PayPal! And we do offer something in return. Click here to view all our perks and select the one that you’d like to receive! Won’t you help us, help others in our community who need it most?