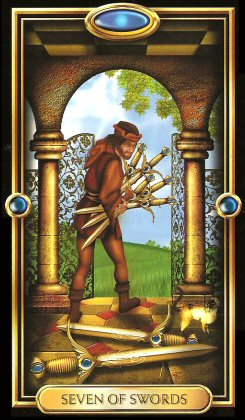 The Gilded Tarot by Ciro Marchetti

When you set your weapons down and refuse to fight, your adversary has no other choice but to walk away. Let them think what they want about your position. You know the fight wasn’t worth the effort and there was no reason to destroy their weak ego. Always give your cornered opponent a way to save face and walk away. You can’t fight desperation.

Surround your enemy and you’ll create a no win situation for anyone. People who are desperate and have nothing left to lose will fight harder and dirtier than any other opponent. Don’t push your adversary into a corner where they have no other option but to fight back with all they have. You might win, maybe. And if you do, the tarnished reputation will be yours. Even if you’re not the one who started the fight.

When you surround an army, leave an outlet free.
Do not press a desperate foe too hard.
~ Sun Tzu “The Art of War”

Showing compassion and giving your enemy a way to escape will sing volumes about you and your character. That alone will allow you to win the day and even the war. But don’t surrender to a battle you didn’t start or that wasn’t your fault to begin with. Sometimes fighting for your reputation is worth the effort. But there are ways to do that quietly where no one needs to know the details behind the scenes. END_OF_DOCUMENT_TOKEN_TO_BE_REPLACED